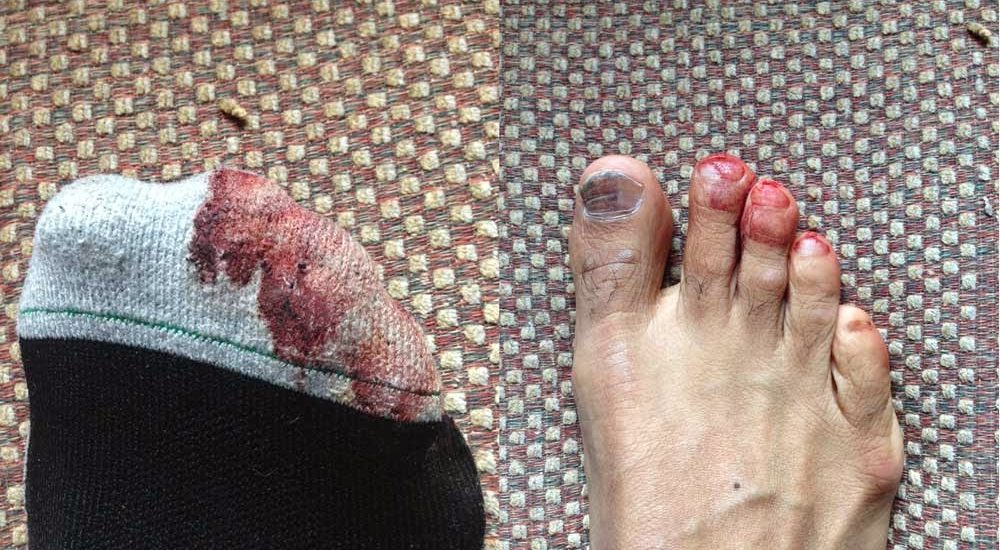 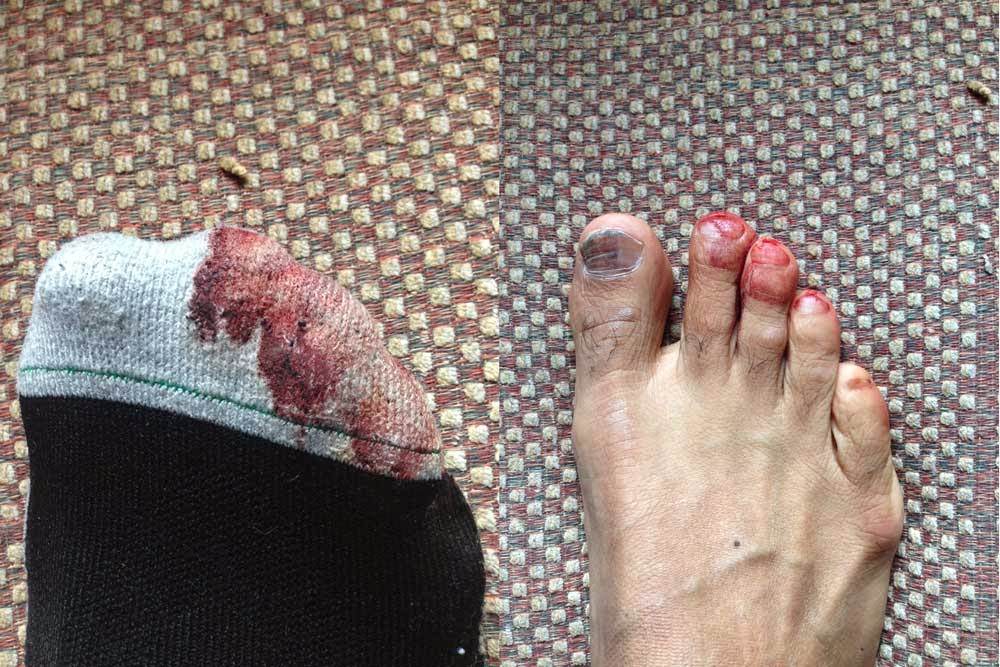 Overcast, chilly, windy and rainy. That was the forecast for the race. It couldn’t be worse weather than last year when I qualified for Boston. I was ready to re-live some of the qualification nostalgia although I was only running the half this year!

3:01AM: I woke up naturally. I’d been tossing and turning (as expected the night before a race), checking my wrist-Garmin every hour or so since midnight. I felt good though. I used to shave race morning but have switched up my routine to shave the night before. I showered, dressed for the race, ate a piece of toast with butter and apricot preserves, had half-a-cup of coffee and relaxed.

4:05AM: I drove to the race alone. Erin dropped out last night. I had an extra bib in my bag which was going to go unused. Traffic to the parking spot was heavy. I eventually got to the parking lot (the finish line at Riverview Mall in Mesa) and headed for the bus. There were lines formed to board the buses to take us to the starting line. Nervous energy was everywhere.

4:45AM: As I stood in line to board the bus, a random woman told me, “Gosh! I forgot my bib; I don’t think they will let me board the bus.” Out of all 8,000 runners, I was probably the only one with an extra bib. What are the chances that this woman just happened to come and tell me this out of all 8,000 people boarding various buses? 1 in 8000 I guess! I told her that I happened to have an extra bib. The look on her face was priceless! I gave her the bib and she boarded the bus. We chatted about nothing for the next 20 minutes. I will probably never see her again, but thanks to Elizabeth and her bib, this woman (her name was Kristi Shawn I think) was happy!

6:10AM: The scene at the starting line was chaotic. There were a few random heaters setup although they were hardly needed. It was chilly and dark but there was plenty of body heat. The lines for the portapotties were long and snaked around trees in the desert. There was plenty of idle chit-chat. Lots of people were stretching already. Rookies! I spoke to a couple of Boston qualifiers. I also met Katie who is planning her first triathlon in March. Best to her…

6:20AM: The plan was to put the car key in the back-pocket of my shorts, a couple of Gatorade Endurance gel pacs (total of 8 gels) in the left-pocket of my shorts and my iPod in the right-pocket of my blue top. When I tried to put the iPod in, I realized that I had worn the shirt inside-out. The race number was pinned on the shirt and there was no time to change it around. It was awkward to place the iPod on the inside of the shirt and then zip it up, but I managed to do it after a bit of a struggle. I hoped that the seam on my shirt wouldn’t bother me during the race. It didn’t. I stretched and stood towards the front of the crowd of 8,000-odd runners. There were no corrals. It was noisy and disorderly. I tore the stinger packet open only to find that it was inedible. Somehow, it had lost all moisture and had hardened to taste like cardboard. I discarded it and ate a couple of gels instead.

6:30AM: (the start and the first 2 miles) We were off. With all the nervous energy, I saw may people sprint out of the gate. I knew I would reel most of them in. My pace was tempered. The first couple of miles are gently downhill. My heartrate was steady in the 140s for the first mile and was rising a bit above my target in the second mile. I saw a girl with a pink hairband pass me. She was decidedly faster. I have seen her at other races. I wondered if I could catch her by the end. I let her go for now. The guy carrying the 1:40 placard caught up to me. He had started a couple of second behind me and with him was a crowd. I decided to join the 1:40 crowd.

6:46AM: (Miles 3, 4 and 5) After a couple of miles, I felt good. We had taken a couple of right and left turns. Each time we went in the southerly direction, I felt the wind directly in my face. I would draft the girl with the zebra headband or the guy in the gray sleeveless. There were about 8 of us running together now. It was a smooth pace of around 7:45 per mile. Our cadences were slightly different, but we all looked comfortable. At the 4.25-mile mark, I felt something weird hitting my shoes. It was a constant striking feeling. I looked down and noticed that my left-shoelace had come loose. Brother! Now what? For now, I decided to run on. I would go on for a mile and see how it felt. Stopping would cost me 30 seconds. More importantly, it would cost me the mojo of the group run and I may not be able to catch back up. I thought to myself, “I have done an Ironman with blood clots in my legs. Surely I can do a half marathon with an untied shoelace.” I ran on…without stopping.

7:07AM: (Miles 6 thru 10) A girl in purple caught up to us. She had a triathlete’s gait. She was a glider (as opposed to a gazelle), but she had excellent speed. If you want to know what I am talking about, see this YouTube video. She decided to run with us. She was taller than me and was wearing a race belt. Her bib number was resting on her butt. Number 5573. I would later find out that her name was Beth. We passed countless people starting at mile 6. They had simply run out of steam. At the 40-minute mark, I ate a couple of gels. At the 6-mile water station, I grabbed a cup of water and downed it. Other than the annoyance of the shoelace, it was smooth running. My heartrate had begun to creep up into the mid 150s, my shoelace was still untied but I felt great. When we turned south, I would draft someone. The girl in purple, the guy in gray sleeveless, the girl with the zebra headband, the placard holder, everyone was fair game. People caught on to my tactic and tried it for themselves. I can’t say for sure, but they must have liked it because people were now running in straight lines of twos and threes! At the aid station, at mile 8, I picked up a Clif gel with chocolate flavor. I opened it and took a swig. Wow! Delicious! I may have found a race-friendly gel that I actually enjoyed.

7:46AM: (Miles 11, 12 and 13) After 10 miles, it was time to pick up the pace. We passed through downtown Mesa as we looped through a few random streets. I decided to pick up the pace on my own. The race was mostly going north and west at this point. With winds from the south but occasionally swirling around, drafting was of little use. I had averaged around 7:40 per mile up until mile 10. I was now running at a sub 7:20 pace and was confident I could keep the pace until the finish. As I left the 1:40 group, I thought that the girl in purple would join me. She didn’t. I was on my own. I saw that girl with the pink headband again. She had to use the loo and was existing the portapotty. She was just a bit faster than me. I kept her in my sights and I ran on. I caught up with and passed countless folks. Some were walking, some were jogging, some were running at a smooth pace. At the 11-mile mark, there was another aid station with the Clif chocolate flavored gel. I grabbed one and downed it. Yummm! I still had another gear with a mile to go. I picked it up again and did mile 13 at a sub-7 pace.

8:08AM: (The finish) The last few hundred yards curve to the finish line and are flat. I looked down at my Garmin and saw that my heart rate was at almost 170. I was going full steam now. I finished strong passing a few more people for an official time of 1:37:58 for an average of 7:29 per mile. This is not a PR for me but it was a very satisfying run.

After the finish I ran into a few familiar faces. AT the Team-in-training tent I saw Megan, John, Mike and Aaron. As I was walking out, I ran into Caty, Jamie and Carol.

After I got home, I removed my shoes and looked down at my socks only to notice that my right sock was bloody. I hadn’t felt anything during the race, but there was obviously a blister of some kind on my right toes. It looked worse than it felt. I could hardly feel any discomfort but thought about my inside-out shirt, my untied shoelace or my bloody toes. I removed my socks to find a small hangnail causing all this fuss. It was nothing. Skin wounds heal easily!

Tomorrow, I will reflect on the race. Here is my Garmin race data.

No comments yet
Marathon race run